THE "CROWN JEWEL" OF RAIL-TO-TRAIL ADVENTURES

The Route of the Hiawatha mountain bike or hike trail is 15 miles long with 10 train tunnels and 7 sky-high trestles. The ride starts with a trip through the 1.661 mile long St. Paul Pass Tunnel, also known as the Taft Tunnel. It is a highlight of the trail that follows the crest of the Bitterroot Mountains near Lookout Pass Ski Area.  The best part is.... it's mostly downhill with shuttle buses available to transport you and your bike back to the top.  This family friendly trail is easily enjoyed by a wide variety of people from young children to super seniors.

The Route of the Hiawatha was named a "Hall of Fame" trail by the Rail-to-Trail Conservancy, one of only 15 trails designated as such in the country.

It was called one of the most scenic stretches of railroad in the country. When the Milwaukee Railroad was operating, the trains traversed through 11 tunnels and over 9 high trestles, covering a 46 mile route that crossed the rugged Bitterroot Mountains between Idaho and Montana. The "Route of the Hiawatha" is most famous for the long St. Paul Pass, or Taft Tunnel which burrows for 8,771 ft. (1.66 miles) under the Bitterroot Mountains at the state line. 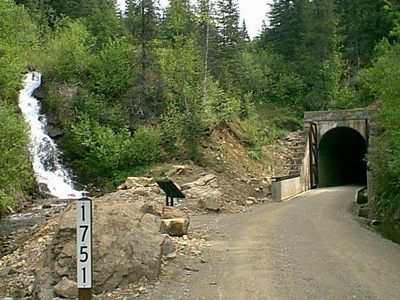 Development of the Idaho Section

In May, 1998 the first 13 miles of the trail were opened to the public for hikers and wilderness biking. This stretch of the trail between Roland and Pearson went through 8 open tunnels and traveled over 7 Sky High trestles following the mountainous terrain along the Loop Creek drainage. The portion of the trail from Moss Creek to Pearson is open only to non-motorized traffic. The ride from Roland (just below the West Portal of the St. Paul Pass, or Taft Tunnel) to Pearson is a very gentle ride on an unpaved gravel road. Being on a railroad grade, this portion of the trail follows a very easy 1.6% downhill grade from 4,160 ft. at the West Portal to 3,175 ft. at Pearson, for a total drop of a little less than 1000 ft. in a distance of 13 miles. For those riders not interested in riding the trail back up the gentle grade from Pearson to Roland, there is a scheduled shuttle bus that provides transportation for riders and their bicycles. The Shuttle bus drops you off in Roland allowing you to ride back through the 1.66 mile long St. Paul Pass/Taft Tunnel to reach the parking lot at the East Portal.

Opening of the St. Paul Pass, or Taft Tunnel

The St. Paul Pass, or Taft Tunnel opened for trail traffic with a Grand Opening ceremony on June 23, 2001. This cavernous, absolutely flat, dark tunnel under the Bitterroot Mountains connects Idaho and Montana, and is 1.66 miles long. Motorized vehicles are not allowed in this tunnel. The main parking area is at the East Portal of the big tunnel, 2 miles from Taft Exit 5 off I-90, just follow the signs. The distance from the East Portal trail head, which is the top trail head, to the bottom trail head at Pearson is an approximately 15 mile ride.

With the opening of the St. Paul Pass tunnel, riders have some additional options. They can park their cars at the East Portal parking area (which is in Montana) to access the Idaho portion of the Hiawatha trail via the tunnel. This is what most visitors do. Another choice is to drive up and over the tunnel for 5 miles via FS Road 506 and over Roland Summit and park at the Roland trail head. This is a good option for those wishing to bypass the big tunnel after the snow has melted in the spring - Usually around the 1st weekend in June. Highlights of the St. Paul Pass tunnel include an interpretive sign, located mid-tunnel on the right wall, that shows the Idaho/Montana state line. This sign also discloses which crew first reached the center of the tunnel in 1907. NOTE - there is a beautiful waterfall at the West Portal of the tunnel (a great place for photos of your group).

Want to Lengthen your ride? Bike from Lookout Pass to the East Portal of the St. Paul Pass, or Taft Tunnel (going east)

From the Lookout Pass parking lot (el. 4,730 ft.), the trail follows the old Northern Pacific railroad grade for approximately 10 miles to the Taft Site (el. 3,630 ft.).
Along the way the trail crosses the St. Regis River 3 times, passes through one tunnel, and goes under Interstate 90 twice before arriving at Taft.
Then from Taft, the trail rises gently at about a 2.1% grade for 2 miles to the East Portal of the St. Paul Pass, or Taft Tunnel (el. 4,160 ft.).

Now that the St. Paul Pass, or Taft Tunnel has been opened, another 31 miles of trail are being planned stretching all the way to St. Regis, Montana. This portion of the trail will include one more tunnel and 2 trestles, and will be for use by bikers, hikers, all terrain vehicles, horses, as well as automobiles.